When in doubt about what to write, or when too lazy to think deeply about a meaningful post, fall back on a little senior humor. 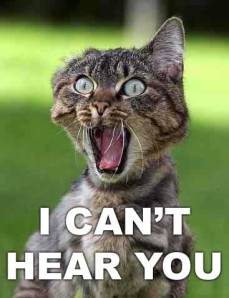 A concerned husband went to the doctor to talk about his wife.

“Doctor,” he said, “I think my wife is losing her hearing. She never hears me the first time I say anything.”

“Go home and tonight,” said the doctor, “stand fifteen feet from her and say something. If she doesn’t reply, move five feet closer and say it again. Keep moving closer until she hears you. This will give me an idea about the degree of her hearing loss.”

When the husband got home, his wife was in the kitchen fixing dinner. He stopped fifteen from her and said, “Honey, what’s for dinner?” No response.

He finally walked up right behind her, put his arms around her waist and said again, “Honey, what’s for dinner?”

Dad didn’t want to admit he was hard of hearing, but when he and Mom moved in with us and I had to repeat everything I said to him at least four times, I made an appointment to get it checked. It was no surprise to anyone but him that he needed hearing aids, but once he had them, they did little good. He forgot to put them in most of the time, and when he remembered, he didn’t get them inserted properly. He often forgot to turn them off when he took them out which ran down the battery, and when he put them in, he forgot to turn them on. After several months, I got tired of the hassle, and since the hearing aids didn’t seem to help that much anyway, I gave up and they sat in the drawer most of the time. One day I asked if he wanted to try his hearing aids again, and he looked at me in confusion.

“Do I have hearing aids?” he said.

An elderly gentleman was invited to the home of some old friends for dinner. His

buddy began every request to his wife with endearing terms, calling her Honey, My Love, Darling, Sweetheart, or Pumpkin. The guest was impressed since the couple had been married almost 70 years. While the wife was in the kitchen, he asked his buddy about it.

“I think it’s wonderful that after all these years, you still call your wife those pet names,” he said.

His buddy hung his head. “To tell you the truth, I forgot her name ten years ago.”

Mom and Dad had their own living area in our Florida home, and most of the time, their TV was so loud that I couldn’t hear their conversations. But sometimes when the TV was off, I could hear what they were saying. Their conversations were not very interesting or varied. Here’s one that was often repeated.

“And you’re my husband.”

I wasn’t sure if this was the senior citizen’s version of sweet nothings, or if, given the states of their memories, they were confirming their respective identities.

An old gent was backing his Rolls Royce into the last available parking space, when a zippy red sports car whipped in behind him to take the spot.

The young driver jumped out and said, “Sorry, Pops, but you’ve got to be young and smart to do that.”

The old man ignored the remark and kept backing until the Rolls had crunched the sports car into a crumpled heap.

When Mom and Dad were still in their own home, I visited frequently. Since the streets in their neighborhood were narrow and they were on a busy corner, I parked in their driveway. They had an extra-wide one-car garage, so there was plenty of room. Sometimes we’d go shopping or out to eat, and since I drove a “zippy red sports car” with almost no backseat, we’d go in their car and Dad would drive. Mom, ever the worrier, always cautioned Dad as he put the car in reverse.

“Don’t back into Linda’s car.”

Dad was a proud man, and he didn’t appreciate the implication that he would be so careless.

One day Mom decided to hold her tongue. You can guess what happened. He backed into my car.

While on a car trip, an elderly couple stopped at a roadside restaurant for lunch. After finishing their meal, they had been on the road for about an hour when the woman cried out.

“Oh, no! I left my glasses on the table. We’ll have to go back and get them.”

“Oh great,” the man said. “This will put us two hours behind. How could you be so forgetful?”

He reluctantly found a place to turn around, and he berated his wife and complained all the way back. They finally arrived, and the woman got out of the car to retrieve her glasses. As she was about to go into the restaurant, the man leaned out the window and yelled to her.

I couldn’t think of a cute Mom and Dad story to go with this joke or even a David and Linda story. I’ll just have to leave you with this reminder. Keep smiling. It will make everyone wonder what you’re up to.

Puppies, Wasps, and Every Day Heroes | by Linda Brendle

Top Ten Comments from the First Year | by Linda Brendle