LTJG Brendle: David went into his second tour of active duty as an officer.

David spent ten years in the Navy, two tours of active duty and the rest in the Reserves. His experiences give him an instant kinship with other service men and women. It’s amazing how many hours can be spent sharing stories and memories. They complain about the rigors of basic training while congratulating themselves on having survived it. They talk about who was where during which campaign and how close they were to each other, and they brag about who got in the most trouble while on leave. Sometimes they even talk about their combat experiences. But there are some parts of the stories they don’t share.

David’s first tour was spent as a corpsman on the USS Enterprise (CVN-65), and he loved it. He loved being at sea and seeing exotic ports. He loved presiding over sick bay, learning to discern between the slackers and those who were really sick. He especially loved the time when he was allowed to drive the huge carrier for a little while. And then came January 14, 1969. Wikipedia describes it this way:

During the morning of 14 January 1969, while being escorted by the destroyers USS Benjamin Stoddert (DDG-22) and USS Rogers (DD-876), a MK-32 Zuni rocket loaded on a parked F-4 Phantom exploded due to ordnance cook off after being overheated by an aircraft start unit mounted to a tow tractor. The explosion set off fires and additional explosions across the flight deck. The fires were brought under control relatively quickly (when compared with previous carrier flight deck fires), but 27 lives were lost and an additional 314 men were injured. The fire destroyed 15 aircraft, and the resulting damage forced Enterprise to put in for repairs at Pearl Harbor Naval Shipyard, primarily to repair the flight deck’s armored plating. 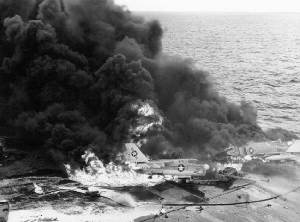 I’ve heard David’s version of the story, how he responded to the sounding of General Quarters as he had been trained, rushing to his battle station in sick bay, not knowing what was going on or what danger he was facing. I’ve heard how he spent those few minutes in the fumes and heat and vibrations on the deck below the explosions. I’ve heard how afterward, he helped with the wounded and the dead, how he held a young man in his arms as he died. I’ve heard the facts, but until a couple of days ago I’d never felt what lies beneath.

Several years ago, David discovered a website dedicated to those who had served and are serving on the Enterprise. He also follows news stories about the Enterprise, and he found one of interest on CNN this week. The Enterprise is scheduled to be deactivated on December 1 of this year, and the CNN website carried a story called On the front lines of history: USS Enterprise on its last deployment. The article gave the history of the carrier and devoted a good bit of print to the explosion. David decided to leave a comment and asked for some help in wording his remarks. Thinking like a writer, I threw out a couple of suggestions, and then I noticed that he was sitting still, his hands hovering over the keyboard. Tears began to trickle down his face, and a sob escaped between clenched teeth. I went over, sat on the arm of his chair, and put my arm around his shoulder. He took a deep breath and pushed the overwhelming emotions down into that place where they have stayed for over 40 years. With his permission, I’m sharing the story he doesn’t usually tell.

I was a corpsman during the fire assigned to repair 5. Repair 5 was located on the hanger deck stbd side aft if I remember correctly. I still remember how I felt experiencing the bombs exploding and not knowing what was happening topside. Even now as I think about the exploding bombs my heart starts racing and the adrenaline flows. I still remember many of those who lost their lives that day. I didn’t know their names, because I met them for the first time as I placed their burned bodies into body bags. I’m sure I’ll never forget those who gave their lives to keep the Enterprise afloat.

To David and all those who have stories they don’t tell, thank you for serving.

Comments on: "The Part of the Story the Veterans Don’t Tell | by Linda Brendle" (3)