Today I have the honor of participating in the cover reveal for Runaway, a novel by Renee Donne. 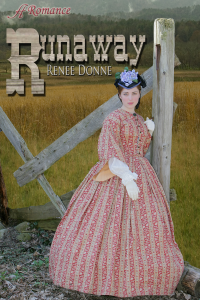 Runaway, a historical romance, will be released by Anaiah Press on July 29, 2014. Here is just a taste of what you can expect in this intriguing story of betrayal, peril, and deliverance.

After Marianne discovers her bankrupt stepfather sold her into marriage to the highest bidder, she flees Philadelphia and heads west to start a new life.

Unfortunately for her danger follows.  First, a stage coach accident leaves her stranded in the middle of nowhere – with an injured driver. And henchmen, hired by her spurned would-be husband, are hot on her trail, threatening to return her to Philadelphia and the man who is determined to own her.

Just when things seem hopeless, Marianne is rescued by a handsome, cowboy who offers temporary refuge.  Knowing she can’t refuse, yet wary of his intentions, Marianne finds herself drawn to this quiet, enigmatic hero. But is he someone she can trust?

Renee Donne is a native Floridian with a penchant for writing books with a western theme. In her head she’s a world traveler and an amateur chef. In real life, she’s a hometown girl with an affinity for fine wine and good friends. Her favorite place to write is sitting on her veranda, overlooking the beach.