Nobody should be yelled at | by Linda Brendle

Published in the Rains County Leader on November 15, 2016: 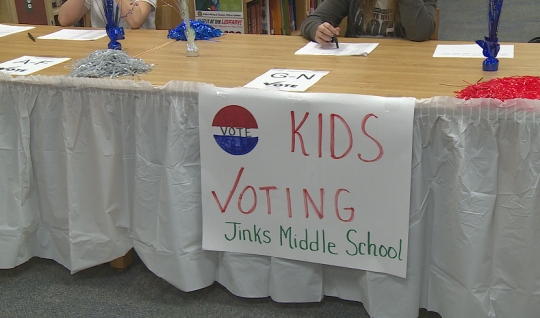 Two weeks ago when I went to visit my sixth-grade friend Julie (not her real name), the cafeteria stage at the Junior High School had been turned into a mock polling place. Several tables were set up, and each table held two open laptops. I didn’t get a look at the screens, but I’m sure they displayed some sort of mock ballot showing the presidential candidates.

While we were eating lunch, a group of students filed in, probably from a history or government class. They formed a line up the stairs to the stage, and one at a time, they presented a green voter card to the poll watcher before going to an empty computer and casting their vote.

“I’ll be right back,” said Julie. “I’m supposed to vote today, and I forgot when.” I wasn’t surprised – she’s not very organized when it comes to school-related schedules and assignments. She was gone a minute or two before she bounced back to the table where she had left me.

“It’s okay. I vote during eighth period.” She played with her lunch a little bit and then made

an announcement. “I’m not voting for Clinton or Trump.”

“Last time we did this, they called my house and told them who I voted for. When I got home, I got yelled at for voting for Obama, so this year I’m voting for that other lady.”

I doubt the school called her home, because, among other reasons, I can’t imagine who would volunteer to make all those phone calls. I suspect she announced her choice on the bus, and her younger brother spilled the beans. Regardless of how her vote became public knowledge, nobody should be yelled at because of who they voted for.

I’ve mentioned before that in my house when I was Julie’s age, political discussions did not travel outside the front door. That is certainly not the case now. Political preferences are shouted, if not from the rooftops, at least on Facebook. The names and faces of favorite candidates are emblazoned on t-shirts, bumper stickers, and yard signs. Choices are argued loud and long at all social gatherings, and those on the opposite side are treated with contempt and hostility.

I thought the pre-election climate was bad with its name-calling and finger-pointing – and this was among the voters and not just the candidates – but the behavior of Americans after the votes were counted has been horrifying. Instead of settling down once the decisions have been made, the vitriol on social media has ramped up. Name-calling has evolved into character assassination. Even posts aimed at healing and unity are attacked with comments that create more word wars. Friendships have been put in jeopardy, families are at odds, and as one blog I read stated, people from both sides are embarrassing themselves.

In addition, some incidents have turned physical, but I have not been able to find sufficient verification to give any details. Suffice it to say that we seem to be acting like a bunch of gloating winners and sore losers.

I am not naïve enough to think that all the nastiness could be avoided by keeping our political choices to ourselves. Still, people have worked long and hard, giving time and even their lives to ensure that voters can make their selection based on the merits of the candidates and not out of fear of being yelled at.

Available in paperback and digital versions.

Elections, Halloween, and the right to complain | by Linda Brendle