Anywhere she wants – a Kitty story | by Linda Brendle 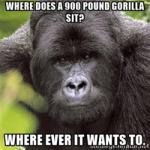 There’s an old joke that poses the questions “Where does a 900-pound gorilla sleep?” The answer, of course, is “anywhere he wants to.” That same principle applies in the Brendle household. The last time we managed to wrangle Kitty onto the scale, she only weighed in at fourteen pounds, but she still sleeps anywhere she wants to.

I set a bad precedence shortly after she evolved from

being an under-the –porch stray to queen of the castle. When she showed an interest in the TV table formerly known as my computer desk, I moved the computer to my ottoman or my lap. It is, after all, a laptop. We also cleared off various surfaces to allow her a clear view out the windows, and she was satisfied with her territory for a while. Lately, though, I’ve noticed subtle encroachments taking place.

First, it was David’s chair at the dinner table. After he finishes his meal, he always takes his plate to the sink and goes into the bedroom to get his evening vitamins while I get the ice cream (there’s always room for Blue Bell). One night not long ago, as soon as he left the table, Kitty hopped up into his chair and made herself comfortable. When he came back, he sweet-talked her a little and tilted the chair slightly. She ignored him, though, and rather than press the issue, he pulled another chair up beside her and sat down. The same thing happened the next night except that he skipped the sweet talk and went straight to the other chair. It seems that I’m not the only enabler in the family.

As for me, Kitty apparently wasn’t satisfied with displacing me from the TV table because she soon set her sights on the ottoman, too. Several nights ago I sat down to do some writing, and I moved my computer from the ottoman to my lap. Kitty immediately moved into the empty spot, stretched out, and promptly went to sleep. When I finished for the evening, I didn’t want to disturb her, so I found a new computer resting place. We’ll see how long she allows me to keep this one.

The final invasion of occupied space came in the bed. When we settle down for the night, Kitty sometimes wanders the house for a while, but if or when she decides to join us in bed, she usually sleeps on my side at the end of the bed. There’s more room there than on David’s side. One night, though, while we were still reading, she found a spot on the turned down comforter on David’s side, and she looked as if she intended to stay there.

“Now where am I supposed to put my feet, Kitty?” he asked. She didn’t respond, so I did.

“How about on my side,” I suggested.

So that’s what we did. I turned on my side and pulled my knees up in my normal sleeping position. David turned corner to corner and straightened his legs so his feet were below mine. We slept that way for a while, at least until Her Majesty decided to leave the bed to us commoners while she wandered around the house.

There is no great purpose to this story except to show how well-trained David and I are. Kitty continues to try out new sleeping spots from time to time, but she releases them back to us once she’s reminded us who is really in charge around here – and once she’s established once again that she can sleep anywhere she wants.

Book Review: The Purpose of Me by Molly Shaffer