The Button Box | by Linda Brendle

My work day as part-time secretary at Believers’ Baptist Church is flexible. As long as I get the work done, Pastor Jason doesn’t care too much what time I arrive or what time I leave. I try to be at my desk no later than 9:30 so I can accomplish a little something before David and I leave at 11:00 to go to the Senior Center, but I frequently have trouble sticking to my own timetable. There’s always one more chapter to read, a chore I left undone the night before, or some wardrobe malfunction to deal with. Last Friday morning, it was a button.

I’m far from a fashionista, so it’s normally a simple matter for me to pick out what I’ll wear each day – jeans or casual slacks, a simple knit top or blouse, and a light jacket in case the air conditioner is on the meat locker setting. Lately, though, since shopping isn’t one of my passions, the choices are dwindling. Friday, I pulled out a favorite but rather seasoned blouse and noticed it was missing a button. I almost put it back in favor of something else, but most of my stand-bys were already in the laundry, so I went in search of my sewing box.

The sewing box is even more neglected than my wardrobe. I’ve never been much of a 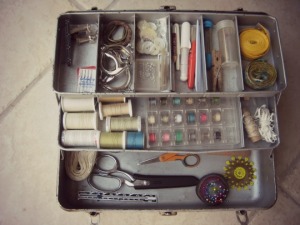 Mine’s not nearly this neat!

seamstress, but I know my way around a sewing machine and can hem or mend when necessary. It’s been a while though, and my sewing box is not what I’d call organized. I don’t know what has happened to all my needles, but I finally found one buried in the bottom of the pin cushion. Luckily, it was one with a rather large eye, and I was able to thread it on the first try. The next step was to find a button. I began a systematic search for the little glassine envelopes that are often attached with price tags – the ones containing the spare buttons that you can never find when you need one. I did finally locate one that, although the button wasn’t an exact match, it was close enough.

I managed to get the replacement button attached and even made it to work by 9:15. The repair held, and I didn’t think any more about it until later at lunch. I had finished eating and was having one of those conversations that sounded like an episode of Seinfeld – just a friendly chat with friends about nothing in particular. I glanced down and the button caught my eye. From that angle, I could tell that it was a bit glossier than the originals, and it was also thinner. Since the conversation had reached one of those lulls that happens every once in a while, I began describing my morning round of “Button, Button, Whose Got the Button.”

“My mother always had a button box,” said one of my friends with a reminiscent smile.

We talked about how everyone had a button box “back then.” That’s where the extra buttons ended up when the pattern called for an odd number but the card at the fabric store held an even number. It was also the storage place for the run-away buttons that ended up in the bottom of the washing machine or the ones that were salvaged from the shirt that was being retired to the rag bag. Mom’s button box was also one of my favorite toys.

Mom was a very talented seamstress. She made quite a few of my clothes and hers before her hands became stiff with the onset of arthritis. When I was really little, I loved to sit on the floor beside her as she worked on her treadle-operated machine. In order to keep my little fingers out of harm’s way and to keep me from using the treadle as a miniature see-saw, she would let me string buttons.

attach a large button on the end of it. Then, she’d sit me down out of her way with her box of buttons, and I’d “sew,” adding button after button to my string, mixing colors, sizes, and shapes, certain that I was creating a masterpiece. Of course, I’m sure some government agency has long since banned that game. Handing a child a sharp metal lance, or giving her a box full of choking hazards, would be considered negligent if not worse.

Sewing was more of a necessity for me than the joy it was for Mom. I did, however, have a button box of my own, and I came across it in the bottom of my sewing box on Friday. It’s an old Tupperware container that’s half full of buttons that will probably never be used. I’m not ready to throw them away, though. There are still too many memories in that box.

The Brendles go to the dogs | by Linda Brendle

An adventurous first day with Spike | by Linda Brendle