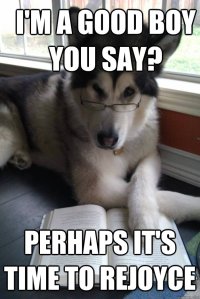 After reading last week’s column about our exciting first day of dog sitting with Spike, one of my readers commented that she couldn’t wait to read the next chapter. There’s good news and bad news about that. The good news is that Spike and David both behaved themselves while I was away on a weekend retreat. The bad news is that good behavior doesn’t usually make very interesting reading.

Not that he was a complete angel. David didn’t mention any nighttime barking while I was gone, but he has a tendency to sleep more soundly than I do. Spike continued to wake me every night around 3:00 or 3:30 am for no apparent reason other than that he was awake and thought everyone else should be, too. Thankfully, he quieted down pretty quickly. One morning when he waited until 5:00 to make his voice heard, I lay down on the couch – more because I was too tired to walk back to the bedroom than out of compassion for the noisy dog – but most nights I scolded him into silence and went back to bed.

After I returned from my trip, I only walked Spike on the leash a time or two. Most days I simply let him run on his own which once might have led to him staying out way too long – but since he has become spoiled to the comforts of the great indoors, he was back at the door long before I became worried. Our last evening there, we were a little late getting back to the house, and I was concerned that, if I let him run, he would become too engrossed with the night critters to come back. I was still scratching from a dozen or so mosquito bites I had acquired during my weekend away, though, so I didn’t really want to walk him. David was engrossed in a movie, so we decided to take a chance. Spike stayed out a little longer than normal, but when he came in, he was panting like – well, like a dog. Maybe we should have been doing that all week. I didn’t hear a peep out of him all night!

While all this was going on, Kitty was home alone. Previously, when we’ve left her at home, she has fared quite well, not seeming to miss us much. This time was different, though. In the past several months, she has become much more affectionate – not quite a lap cat yet, but beginning to enjoy and even encourage petting as long as it’s on her terms. She meets us at the door when we come home in the evening, and she stands on the recliner by the door, demanding to be petted before we can even put down whatever bags or packages we might be carrying. She still doesn’t like to sit with me in my chair, but she allows David to pick her up and sit down on the couch with her. She will stand on his legs, but she prefers to be beside him, wedged between his leg and the arm of the couch. She also follows us around, rubbing against our legs and demanding to be petted, usually when David has a toothbrush in his mouth or I have my hands in the sink.

Regardless of how independent she pretends to be, she missed our attentions while we were gone. David often came to visit her while I was working, and he said she didn’t want him to stop petting her when he first came in. When he did, she would follow wherever he went, trying to rub against his legs while he was moving, which could have ended badly for both of them. She wasn’t as attentive to me when I was with David, but one day I came by myself, and she decided I’d do. She even allowed me to pick her up and sit with her on the couch. She tentatively put a paw on my leg for a few seconds before settling down, facing away from me at a forty-five degree angle with her backside against my leg. It was the Kitty version of tolerance.

The first night we were home, she alternated between being loving and catty – pun intended. She would make all her friendly overtures one moment, and the next she would run from one end of the house to the other and then grab me be the ankle and bite my foot. I didn’t take it too personally, though, because I understood what was going on. I raised a son who would go through the love/hate thing when I left him with Nana and Granddaddy for a couple of nights. I wonder how Spike reacted when his people came home.

An adventurous first day with Spike | by Linda Brendle