The Princess and the Kitty Bed | by Linda Brendle

Published in the Rains County Leader on January 9, 2018: 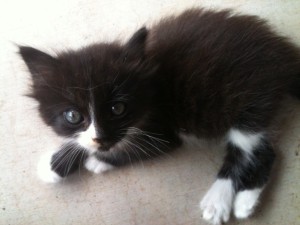 It’s no secret that Kitty is spoiled and that she reigns in the Brendle home, but I don’t think I realized how true that is until this past weekend. The fairy tale of the “Princess and the Pea” is not much of a tale compared with “The Princess and the Kitty Bed.”

When Kitty first began to sleep in the laundry room on cold nights, I folded an old mattress pad and put it in a laundry basket on top of the dryer for her. It gave her a place off the cold tile and away from the draft that crept in under the door. There was always a Kitty shaped depression in the middle of it along with an abundance of her excess fur each morning, so I assumed it met with her approval.

Later, as she worked her way further into our hearts and our home, she abandoned her 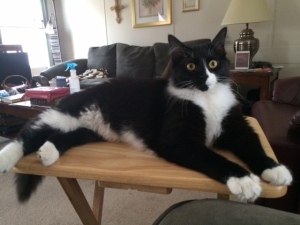 laundry basket but never seemed to settle on a particular sleeping place. On one of my frequent trips to the pet department, I bought her a cushy little bed covered in blue and gray velour. I thought it was a bed fit for a princess, but she didn’t agree.

I tried everything to lure her to try it out, convinced that once she snuggled into it, she wouldn’t want to leave it. I placed it in some of her favorite sleeping places – halfway between the dining room and the living room, on top of the cedar chest, and even under our bed. She ignored it. I sprinkled it with catnip to no avail. I even spread a few of her favorite snacks in it, but she managed to snag the goodies without getting in the bed. 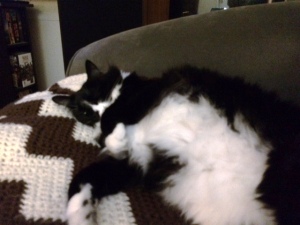 For a year or so, the bed has lingered in limbo while she explored other places to lie down. She can be found lounging in her Kitty condo or a dining chair staring out the window into the back yard. She has recently adopted the foot of our bed as her own and sometimes creeps up to lie against me if she’s particularly cold or lonely. Her favorite place, though, is the end of the couch where David sits or lies down to watch TV. She particularly likes to nestle into the crocheted afghan when it’s folded into a neat square, but she will lie against David’s leg if he’s using the afghan to ward off a chill. I’m not sure if he’s the attraction or if it’s the edge of the afghan she’s after, but either way, they’re both happy.

Then Christmas came. A week or so before the big day, a large box from Amazon arrived on our front porch. Our son had told us to expect a gift and had said it would be wrapped so we could open the shipping box. The gift was in a large red bag made of shiny red satiny fabric, and Kitty was fascinated. She didn’t damage it, but she returned to it repeatedly to sniff and rub against it. On Christmas morning the bag was removed to reveal an Instant Pot Multi-Function Cooker (probably more about that in another column), and the bag was abandoned on the floor.

At least it was abandoned until Kitty discovered it lying there. Several times during the 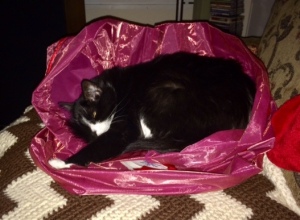 day I noticed her investigating it, inside and out, or lying on it looking smugly comfortable. Later, after lunch with Aunt Fay, I was straightening the living room, and I picked up the bag, wondering what to do with it. I hated to throw it away, so I put it on the afghan on the couch. It wasn’t long before Kitty was lying, not just on it, but halfway in it, snoozing away.

The red bag stayed there for the next week or so until last Saturday when I decided to do a little more thorough cleaning than usual. I dragged out the heavy vacuum instead of the carpet sweeper, and I moved a few of the lighter items instead of just cleaning around the edges. The lightest item, of course, was the Kitty bed that was always in the way. I picked it up and started to put it on the love seat as usual, but instead I put it on the afghan with the red bag on top of it. 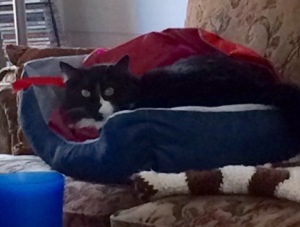 When the cleaning was done, I sat down on the love seat to read for a few minutes, and Kitty jumped up on the couch to rest from dodging the vacuum. She stood looking at the Kitty bed for a few minutes and then crept up on it slowly. She tested it warily with one foot, and when nothing bad happened she climbed in. Since then, she has spent many happy hours snuggled down. It seems to me that Kitty may suffer from “princess syndrome,” but all it took to satisfy Her Furry Highness was red satin sheets. 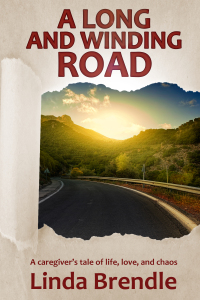 Book Review: One Night in Tehran: A Titus Ray Thriller by Luana Ehrlich