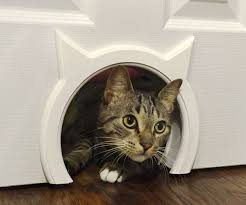 Anyone who has pets, especially curious cats, knows that these animals have a thing about closed doors. They have a strong desire to be on the side of the door where they’re not. It’s the pet version of “The Grass Is Always Greener” – that thing that causes cows and horses to stretch their necks between strands of barbed wire to try and reach one scrawny dandelion while standing in a patch of lush green clover. It was also probably the inspiration behind the invention of the pet door that so many of us have installed in our homes.

house where Kitty has tried to dig her way under the offending obstacle. It has also led to the creation of several games. Her favorite – and by far the noisiest – is “Beat David to the Office.” Our home is approximately eighty feet long from end to end, with the master bedroom on one end and the office on the other. The office door is one of Kitty’s greatest challenges because it is usually closed. In addition, I’ve put a throw rug across the threshold of the doorway, so she can’t even pull threads out of the carpet to express her frustration. But she is always on the alert for a chance to slip into that wonderland of shelves and computer wires. Even if she is asleep on our bed, if David takes a step down the hallway toward the office, she comes thundering through the house – who knew one thirteen-pound cat could sound so much like a stampede – and dashes into the office ahead of him.

Her second favorite game is “The Breakfast Dash.” After she has finished her morning jumping jack routine on the bed and I am sufficiently awake, she goes and hides behind the rocking chair. Once I’ve found my glasses and house shoes and am moving toward the kitchen, the game begins. The object seems to be to dash out from behind the rocker and to her food bowl without either tripping me or running into the cabinet. Her braking ability is not always great on the tile floor.

She doesn’t always want to play “The Breakfast Dash,” though. I’m a pretty early riser, and if she’s been up roaming the house all night, she sometimes decides to sleep in. On those mornings, I leave the bedroom door ajar slightly so she can open it when she feels the need without announcing her desire by clawing the carpet. Once she has graced me with her presence in the living room, I close the door so the light won’t bother David. She’s usually okay with that, content to lie on the end table by the love seat where I sit for my morning quiet time.

This past week, however, she disrupted the routine with the introduction of a new game. I think it was Wednesday morning, several days after the time change. She was still sleeping when I woke up coughing and decided to go ahead and get up. She roused enough to watch me go into the kitchen, but since she showed no interest in moving from her warm spot on the bed, I closed the door. It wasn’t long before I heard the sound of little fingernails, so I opened the door for Her Majesty. She strolled through with her nose in the air, but the second I started the close the door, she made a beeline for the bedroom. We repeated this little dance step a few times before I finally got smart and left the door ajar. The next time I looked, she was sitting squarely on the threshold, daring me to guess which room she wanted to be in.

I tired of the game before she did and left her standing – or sitting – guard. Her new game isn’t any fun without an opponent, so she soon joined me in the living room. Once she was settled by the window, watching whatever it is she sees in the dark, I casually picked up my coffee cup and headed for the kitchen for a refill. Of course, while I was there, I closed the door without interference.

Kitty’s new game probably won’t win any awards. In fact, I’m not sure it will be popular enough to rate a name. Still, it entertained her for a few minutes, and it gave me some new material, so I guess it’s worth an honorable mention. 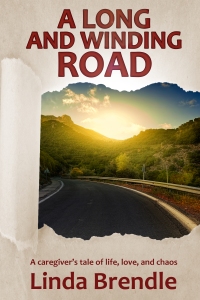 Signs of Easter | by Linda Brendle