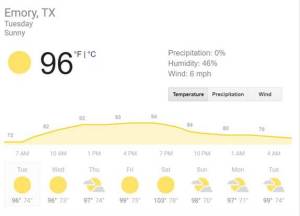 According to USClimateData.com, the average high temperature in Emory for May is 80 degrees and for June is 87 degrees. Apparently someone didn’t get the memo, because weather.com says that we’ve already had nine days over 90 degrees in May this year, and in the next two weeks, the forecast is for six days of triple digit temperatures. The website’s weather calendars from last year show only one day when the thermometer reached that high level, and that was on July 28 when the mercury hit 101 degrees. If this year’s late spring is any indication, we’re in for a long, hot summer.

When it gets this hot, someone who is old enough to know the answer invariably asks, “How did we survive back in the days before air conditioning?” Then, the conversation turns to all the methods we used to beat the heat. David and I have been driving the older car this week, and the air coming out of the A/C vents was just barely cool. On Sunday he stopped at the auto supply where he left the car running so it would be cool for me while he ran in to get some Freon. It didn’t work. As the temperature began to rise, I thought about how we lived back in the olden days.

First of all, we had lots of fans, and we kept the windows and doors open most of the

time. We played outside early in the day and late in the evening, and after lunch all the kids took a nap. Mom and Dad had a swamp cooler mounted in the window of their bedroom, and I spent many afternoons reading on a quilt spread on the floor in front of it. I did the same thing at Aunt Fay’s, except instead of being alone, I was one of several sweaty kids lined up in a row on the blanket.

Sometimes we’d gather in the evening for a holiday cookout or a just because wiener roast, and the little ones would take turns sitting on the ice cream freezer while one of the older kids or one of the men turned the crank. We’d suck on pieces of salty ice, and when our backsides were numb from the cold, we’d relinquish our seat to the next in line. The second best cooling method was the large metal dispenser that usually sat on the open tailgate of a convenient pickup. It was filled with ice-cold water and flanked by a sleeve of small paper cones that added to the fun of pushing the button and dispensing a cool drink.

When we traveled, Mom and Dad set their alarm for 4:00 am or sometimes earlier.

They’d make a pot of coffee, and after slugging back a quick cup, they’d pour the rest into a thermos and wake us. I’m not sure about my older brother, but I usually went back to sleep until we stopped for breakfast around 7:00. We rode with all the windows down until the sun got too hot. Then we rolled them up – with crank handles – and hung towels for makeshift shade. Dad would buy a block of ice or a bag of crushed ice and set it in a dishpan on the floor in front of the air vents for a mobile version of a swamp cooler. I preferred the bag of ice because we could eat the pieces for some extra cooling.

We didn’t have fancy sport bottles or insulated cups, but we each had an aluminum glass, each one a different color, or a disposable cup with our name scribbled on it. We drank lots of Kool-Aid and iced tea, and if we were in too much of a hurry to go inside, we’d let the water run until it was cool, and we’d drink out of the hose. When we had drunk our fill, we’d accidentally squirt each other until we were drenched but cooler.

Between the fans, the open windows, the ice, and the cool drinks, we were able to survive the Texas summers. But what we did most was sweat, and it was a very effective way to cool off. Even a hot breeze on damp skin has a cooling effect. It’s almost as if God planned it that way.

Recent reviews of A Long and Winding Road | by Linda Brendle