Some people have expressed reluctance to read Tatia’s Tattoo because of the subject matter – sex trafficking in small-town America. Following are some excerpt from a Facebook conversation with a recent reader:

Very good! 5 stars so far. I’m about half way through. I didn’t get my nap in today because I couldn’t put the book down.

I’m not done, but already find myself looking forward to the sequel.
I really like your writing style, not too wordy.
Being a victim of abuse myself, I was a little worried going into it, being a book about sex trafficking. A lot of writers these days go for shock value. But you’ve handled those bits and pieces very tactfully and I appreciate that.

Thank you for being respectful and not making us that are victims re-live it and proving that there is a light at the end of the tunnel.

You can read the Preface and the first two chapters by clicking HERE and then clicking Download a Sample below the book cover. There is also a buy link there.
You can also find it at AMAZON.
Blessings,
Linda

I was on the road yesterday and missed sharing the post for Day 11. The Rafflecopter is still live, though. You have 13 more hours to click over to Sara’s blog and click on the link at the bottom of her post for a chance to win. The prize is an ebook of Holly Cohen’s Christmas novel, The Christmas Angel in Apt 3C along with a cute Angel bookmark! Don’t miss it!

I can’t believe we’re one day away from the end of 12 days of Christmas giveaways.

Today, I’m excited to introduce to you author, Holly Cohen, and her Christmas novel, The Christmas Angel in Apt 3C. She’s giving away a copy of her new book, along with a cute Angel bookmark! This is the perfect prize to win right before Christmas.

Without Mama, Christmas has ceased to exist for Papa, but this year, Angel is determined to bring some Yuletide joy back into their lives. With little money, no decorations, and not much time left until the big day, she is facing an uphill climb all the way. Help comes one night in the form of an ethereal voice that drifts through her window, singing words of comfort. Angel vows…

DAY 10 OF THE 12 DAYS OF CHRISTMAS GIVEAWAYS. Today you have a chance to win two ebooks – Unanchored by Stephanie Eding and Saving Mount Rushmore by Andrea Jo Rodgers. Click over to Sara’s blog where you can enter the Rafflecopter for a chance to win. Don’t forget to click over to yesterday’s link which is still live through today. Winning two Christmas packages would be extra special!

Today it’s all about YA action and adventure. (One of my favorite genres. Even more so when a little romance is thrown into the plot).) We’ve got a double e-book prize for you from two wonderful authors. 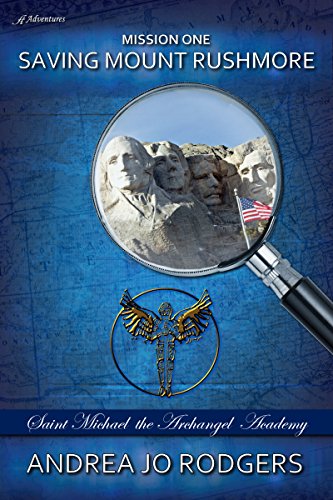 When John Jenkins’ parents ship him ff to stay with his aunt, he’s certain it will be the worst summer ever—until he learns he’s been accepted into a top-secret school. St. Michael’s Academy is home to gifted students with extraordinary talents. Although John has no idea why he’s there, he’s assigned to Team Liberty, who assist authorities with solving low-level crimes. Their first mission: stop a trio of mischief-making teens from vandalizing Mount Rushmore.

DAY 9 OF THE 12 DAYS OF CHRISTMAS GIVEAWAYS.Today Jackie Minniti is giving away a signed paperback of her children’s chapter book, Jacqueline. Click over to Sara’s blog where you can enter the Rafflecopter for a chance to win. Don’t forget to click over to yesterday’s link which is still live through today. Winning two Christmas packages would be extra special!

Today we have an incredibly special treat for you, my friends.

Our featured author, Jackie Minniti, is giving away a signed paperback of her children’s chapter book, Jacqueline.

When ten-year-old Jacqueline Falna hears her mother’s scream, she is unaware that the axis of her world is about to tilt. Her father’s plane has been shot down by German fighters. In the midst of poverty, food shortages, air raids, and the grinding hardship of daily life under Nazi rule, she forms an unlikely alliance with…

DAY 8 OF THE 12 DAYS OF CHRISTMAS GIVEAWAYS. Today you can win ebooks by Kathy Eeton and Becca Hart – the perfect way to relax when you find a few quiet moments away from the Christmas rush. Click over to Sara’s blog where you can enter the Rafflecopter for a chance to win. Don’t forget to click over to yesterday’s link which is still live through today. Winning two Christmas packages would be double fun!

It’s almost Christmas! Can you feel it? Are you frazzled yet by the hustle and bustle of the holidays? I hope you’ve found time to breathe and to relax; what better way to relax than with a Christmas novella and a romantic suspense?

Today, you have the chance to win THREE E-BOOKS. Right on time for Christmas! I am excited for you all. Speaking on behalf of all bookworms, there’s nothing more exciting than free, high quality books 🙂

(By the way, I love this cover. It’s so Christmas-y and romantic! Love!!)

Sarah Laughlin left her big-city life and dead-end relationship behind for a fresh start as a fourth-grade teacher in the small, Wisconsin town of Meadow…

DAY 7 OF THE 12 DAYS OF CHRISTMAS GIVEAWAYS. Today Sara Beth Williams offers you the chance to win an ebook of her novel, When Hearts Collide, as well as a Christmas mug and tea and hot chocolate to go with it. Click over to Sara’s blog where you can enter the Rafflecopter for a chance to win.

I can’t believe we’re halfway through my very first 12 days of Christmas Giveaway!

Amid all the hustle and craziness of the holidays, my hope is that these 12 days of giveaways help brighten your day by introducing you to new authors, and by offering you a chance to win fun prizes.

Today, I’m here to offer you the chance to win an ebook of When Hearts Collide, as well as a Christmas Coffee mug (who loves these, I do!) and tea and hot chocolate to go with it!

A reckless mistake landed Jacob “Jay” Mathews behind bars, but it was his inescapable guilt that led him to God. Upon his release, with the help of a spiritual mentor and friend, he strives to move forward with his life. Determined to graduate college, get a job…

DAY 6 OF THE 12 DAYS OF CHRISTMAS GIVEAWAYS. Beverly Varnado will be giving away a copy of her contemporary romance, The Key to Everything plus a gift basket with a mug and scarf. Click over to Sara’s blog where you can enter the Rafflecopter for a chance to win.

I’m so stoked about this big giveaway. It’s my first multi-author project, and I am honored and excited to highlight great authors from various genres!

Today it’s all about that romance. Beverly Varnado will be giving away a copy of her contemporary romance, The Key to Everything plus a gift basket with a mug and scarf. Oooh sounds perfect for some of y’all living in snowy states.

When nurse practitioner, Dr Genny Sanders inherits her late-grandmother’s house, she moves back to her hometown of Worthville, Georgia, determined to leave her past—and her scheming ex—behind her with a new job and new friends. But during a meeting with her grandmother’s estate attorney, David Worth, she learns of a threat to her property. A local developer wants to buy her land and demolish her house.

Published in the Rains County Leader on December 18, 2018:

I opened my Facebook account ten years ago when one of my friends sent me an invitation. I didn’t really know much about social networking, but my friend lured me in with the promise of pictures of her grandchildren. After looking at those sweet faces, I was hooked.

I was working on my first book at the time, and when I was told by those who know that it is imperative for the modern author to be active on social media, my future was set. A decade later, I am not only active on Facebook, but I also have a blog and accounts on Twitter, LinkedIn, Google+, Instagram, Pinterest, and several other sites. END_OF_DOCUMENT_TOKEN_TO_BE_REPLACED

Day 5 of the 12 Days of Christmas Giveaways. Today’s prize is two romantic suspense ebooks by Jenn Pierce​ , Hidden Danger and Expecting Danger. Click over to Sara’s blog where you can enter the Rafflecopter for a chance to win. (Yesterday was my day, and the giveaway is still open for a few more hours. Enter both.)

I’m thrilled today, to bring you a giveaway from someone who’s become a writing friend! I’ve read her first book and am excited to begin the second one this weekend!

Today, Jennifer Pierce is giving away copies of Hidden Danger, and Expecting Danger. IIf you like romantic suspense, this awesome lady knows how to keep you on the edge of your seat with her pacing. Check out my review of Hidden Danger here.

All Maggie Jones wants to do is sell her late father’s property and get out of Whitehaven, Texas as fast as possible—before she runs into the one man she’s spent the past six years avoiding. Someone has other plans for her, though. Sinister plans. And when a seemingly harmless act of vandalism turns into a series of menacing threats, she has no choice…

Love Is Stronger than Alzheimer’s | by Linda Brendle

Today is my day in the 12 Days of Christmas Giveaways. Read to the bottom of this post to find out how to enter for a chance to win a signed copy of the first edition of A Long and Winding Road: A Caregiver’s Tale of Life, Love, and Chaos along with assorted other goodies.

Even into his late 80s, Dad was a nice looking man, but he was a real cutie as a teenager. All the girls wanted to catch his attention, but he sat quietly on the school bus, wrapped in his own thoughts and shyness. They watched him, giggling and hoping he’d look their way. END_OF_DOCUMENT_TOKEN_TO_BE_REPLACED