Tales from the Rains County Fair | by Linda Brendle

Published in the Rains County Leader on September 17, 2017: 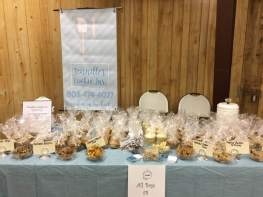 For the second year in a row I shared a booth at the Rains County Fair with Tennille Case of Tennille’s Cookie Jar. Not only was I right next to all the delicious samples she put out, but I also had the advantage of overflow traffic. My book displays gave her customers something to look at while they waited in line, and she’s a big fan, so she directed them my way.

We had a great location, the same one we had last year. It was right next to the restrooms, so almost everyone who came to the Fair walked right by us at some point during the evening. Even if they didn’t stop, the steady stream of visitors made for great people watching and a nice collection of writing material. Here are a few of the random observations I collected while sitting behind a table, four hours a night for five nights.

The restrooms are showing their age, but they were free of graffiti and other types of

vandalism. They were clean and tidy, and the paper products were restocked regularly. About mid-week I heard this comment after someone had made a bathroom check: “The women have gone through most of two bottles of hand soap, but the men have barely made a dent in one.” Not judging – just sayin’.

I was not the only one who enjoyed Tennille’s samples, but reactions were sometimes strange. The small cookie wedges were in bowls lined up along the front edge of the table, and there was a bowl of toothpicks to help keep the samples relatively sanitary. On the first night, a boy of about seven discovered the goodies while his friends visited the men’s room. He looked at Tennille with wide eyes and asked, “Are these free?” When she said yes, he became very animated, and when his friends came out, he waved them over. “Look, these are free!” All the boys except one grabbed a couple of tasty bites and headed back outside. The last one, however, shouted, “Wow!” Then, he grabbed a toothpick, stuck it in his mouth, and took off after his friends. 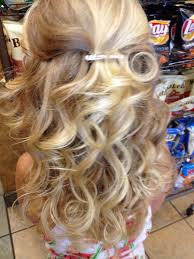 On pageant nights, we got to see many of the participants up close and personal. Little girls and young women with fancy hair and makeup would go into the restroom in shorts, t-shirts, and flip flops and come out in satin, lace, and tulle. Some were wearing sparkly shoes while some were still in flip flops and were carrying their stage shoes under their arms. All of them were followed by mothers and other attendants who carried bags and petticoats and looked more nervous than the girls. When the pageants were over, the process was reversed and they became children again, leaving behind a sprinkling of sequins and glitter on the restroom floor.

Friday night was mutton busting time, and the princesses were replaced by little 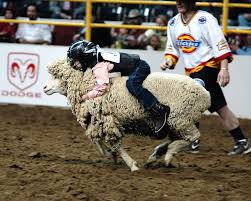 cowboys swaggering around in boots, jeans, and pearl buttoned shirts with numbers on their backs. When asked, they were more than willing to describe their rides in great detail. One sweet little curly-haired blonde exemplified the ultimate in Girl Power by participating in both a pageant and the mutton busting. She didn’t win any prizes, but she was as proud of her new boots at church on Sunday morning as if she had received a crown or a belt buckle. 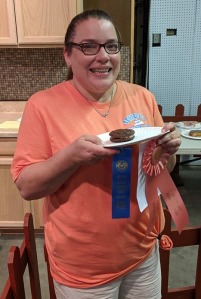 The most exciting night by far was Saturday when the baked goods were judged. Tennille started her business less than two years ago, but it was truly an overnight success. Still, she lacks confidence in the cookies that people rave over, line up for, and mourn over when their favorites are not available. Her husband Jeremy has enough confidence for both of them, and he pushed her into entering her German Chocolate Crème Cookies. She was a nervous wreck, unable to sit still and bordering on hyperventilation while she waited to hear the results. She was shaking so much it was hard to get pictures of her holding her blue ribbon for first place in the Cookie Division and her pink rosette for Grand Reserve Champion Overall. If that doesn’t boost her confidence, nothing will.

I saw Tennille at church this morning, and we shared a congratulatory hug at having survived another Fair Week. We also shared plans for an afternoon nap. It was a great week, and I appreciate all the people who stopped by to say hello, to tell me how much they enjoy my column, and maybe to buy a book. But now I’m ready to hibernate for a little while. It’s time to rest up and work on a new book or two. After all, the 2020 Rains County Fair will be here before we know it.

How a writer gets even | by Linda Brendle