Published in the Rains County Leader on December 17, 2019:

When I was a kid, December 26 was Granny Hagan’s birthday. Later on it became the day to return those what-were-you-thinking gifts and to stock up on Christmas supplies for next year. More recently I’ve heard it referred to by a specific name, especially on Facebook when greetings of “Happy Boxing Day” appear on the day after Christmas.

It turns out that Boxing Day began in Britain as a time when the rich boxed up gifts for the poor. I’m thinking it might have been a charitable way to get rid of

the leftover turkey and those unsuitable gifts. It also became a day when servants were given the day off after receiving a Christmas box or gift from their employers. The servants in turn would go home and give Christmas boxes to their families.

Boxing Day isn’t widely celebrated in the U.S., but boxes certainly play a big part in the American Christmas season. Even though gift bags are probably more popular now than gift boxes, online shopping has resulted in an over-abundance of shipping cartons. And some traditionalists still like to wrap and tie bows on containers with square corners. 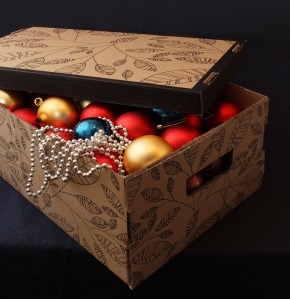 No matter how gifts are packaged, boxes are still needed to store decorations after all the celebrating is finished. Apparently some people have an attic full of such boxes, and it becomes a major event to take them down and put them up each year. We have several such boxes, but I haven’t seen them since we moved to Emory in 2010. They were last into the moving POD and first out which meant they were the first items put up in the loft of our storage shed. I suspect that might have been intentional on David’s part since holiday decorating is not one of his favorite things to do. Regardless of the reason, a ton of stuff we will one day look at and wonder why on earth we kept it has been crammed in on top of and in front of the strings of lights and other ornaments. In addition, we now have a very nosy and undisciplined cat, so our home décor remains unchanged year round.

Christmas decorating was much simpler during my childhood, especially in my

home. Our tree was rarely taller than Dad who was several inches shy of six feet, and our decorations fit in a couple of cardboard boxes that were dusty and soft from years in the garage. The ornaments were what would be called vintage now, and the lights were strings of large bulbs of the one-or-none variety. We spent lots of time looking for the burned out one. Instead of the brilliant shine of hundreds of tiny white lights most people favor today, our few strings of multi-colored lights gave off a soft glow in a darkened room that, along with the scent of a recently cut pine tree, felt like Christmas. We had a few special bulbs scattered throughout the lights, and when they began to blink randomly, the shadows dancing on the ceiling were magical.

Christmas boxes had a completely different meaning in Dad’s childhood home. I once asked him about what kind of tree they had, and he smiled as his eyes grew distant with memories. “We didn’t have a tree,” he said. “We had a box.” When I looked confused, he said they put a big open box in the living room, and the few presents they had were piled in it until Christmas morning when the gifts were distributed. He was the next-to-the-youngest of nine children, and the oldest was twenty years older than he was. One of his older brothers was a very talented wood worker, and one year he began working on a project that fascinated Dad. It was a toy train with wheels that turned. When the big day came and the family gathered around the Christmas box, Dad’s name was on it. Dad had thought that whoever received that train would be the luckiest little boy in the world, and now it was his.

I don’t know exactly when disposable boxes were invented, but the first Christmas 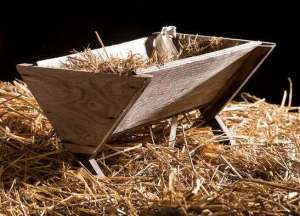 involved a different kind of box. We don’t know for sure if it was made of wood or if it was carved out of the wall of a cave, but it was probably lined with hay instead of tissue. The long-awaited gift inside was wrapped in swaddling cloths instead of ribbon. The light He brought outshines the brightest of Christmas displays, the love He gives is greater than any brother can offer, and the life He offers will outlast the most elaborate gifts. May the joy and promise of that first Christmas gift be yours now and forever.

Thanks be to God for his inexpressible gift! 2 Corinthians 9:15

Twas the Night Before Christmas | by Linda Brendle