The Call of the Wild | by Linda Brendle

Published in the Rains County Leader on February 25, 2020: 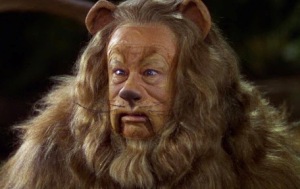 First, let me say this column is not about the Jack London novel or the new Harrison Ford movie. It’s sort of about a dog, but it mostly about me being a fraidy-cat.

This week David and I are visiting with Spike, our occasional canine son, while his people visit the Holy Land. Their flight was a late one, so the plan was for Spike to have his supper before they left and stay in the house until we arrived after Home Group was over. Then, we’d walk him one more time before bedtime.

It was a good plan, but the problem was that David didn’t feel well, so he didn’t go to Home Group. That meant I had to go back home to pick him up before heading out to the ranch. These things always take longer than expected, and it was late and very dark when we arrived – and the coyotes were out.

Now, I’ve heard the coyotes howling before and even seen a couple prowling the

perimeter during the day, but this was different. Instead of distant barking that sounded like a pack of dogs a mile or so away, these sounded as if they were just behind the barn. And instead of barking, they were howling – the spine-tingling, plaintiff wails you hear in western movies when the lone cowboy sees the reflection of his campfire in multiple pairs of red eyes at the edge of the darkness. Needless to say, I was relieved when the garage door was down and we were safely inside.

During the daylight hours, Spike has free run of the sixty-five acres of the ranch – and sometimes beyond when he crawls out under the fence. But after dark, to avoid him chasing after every critter that rustles the grass and finding himself in the middle of a pack of less than friendly neighbors, he goes out on a leash. David usually does the honors, especially since my shoulder surgery, but that night he didn’t feel like getting out of his chair. I thought of those howls, and I gave Spike his after-walk cookie without the walk, hoping he could cross his legs until morning. 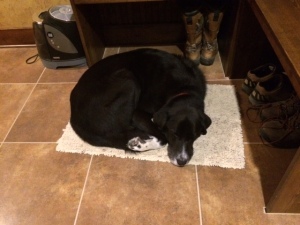 I was pretty sure he’d be okay since Stella has talked about leaving him in the house for up to eighteen hours without an accident. But I felt guilty when he came to the door of our bedroom and whined a bit several times during the night – not guilty enough to face the beasts, but guilty nonetheless. By 5:30, even though it was still over an hour until sunrise, I figured the coyotes had gone home, so I let him out to run and bark and take care of business. I prayed he would be okay, and I was relieved when I finally got out of bed a little after 7:00 to find him curled up on the patio, asleep and unmarked.

The next night, David still wasn’t up to par, so he went to bed around 8:30. Spike was 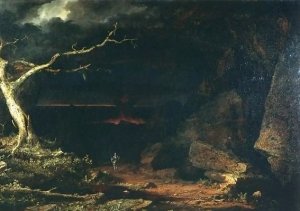 snoozing peacefully on his mat by the door, and I hoped he would sleep through the night. No such luck! At 9:00 sharp he yawned, stretched, and walked over to my chair, fixing me with a stare that said plainly, You’re not getting away without a walk two nights in a row. I sighed and went to get my new running shoes in case I needed to make a run for it. I turned on every outside light I could find, picked up David’s super-duper flashlight, and stepped out the door with Spike’s leash gripped tightly in my hand. At the edge of the patio, I stopped for a minute and listened. I didn’t hear anything, but that could have been because my heart was pounding and I was repeating The Twenty-Third Psalm, especially that part about even though I walk through the valley of the shadow of death, I will fear no evil, for you are with me.

We walked slowly down the driveway with me swinging the flashlight from side to side, trying to light up every shadow and him perking his ears at every rabbit or gopher that made a sound. I heard a few faint barks, but nothing too alarming. Spike ambled along contentedly in the middle of the driveway toward the gate, but before we got to the section that goes through the woods, I pulled him up. “That’s far enough,” I said turning around and directing him over to the grass along the edge of the driveway where he obediently did his business. I counted it a victory that I walked calmly back to the house without breaking into a run, dragging Spike behind me.

I lived to tell the tale, so if David continues to feel puny, I suppose I can take Spike on his evening walks. But if I hear the call of the wild again, he’s on his own.

An evening at the theater | by Linda Brendle

Things I’ve Learned at the Gym | by Linda Brendle