Published in the Rains County Leader on November 24, 2022:

Last  week I shared a post I called Counting or Complaining about counting your blessings. This column will be in the edition released on Thanksgiving Day, and I want to share one of my favorite stories about gratitude from a column I shared in 2014.

On Sunday, Pastor Jason preached about being thankful – yours probably did, too. The sermon was enlightening and inspiring, but what really stuck with me was a comment he made in his introductory remarks: “I’ve always thought we should devote 364 days a year to being thankful and set aside only one day for grumbling and complaining.”

This time of year, a lot of people talk about cultivating an attitude of gratitude, but sometimes the resolve doesn’t last long. It takes time to develop a daily habit of being thankful. In keeping with that thought, I’d like to share a story about a lady who knew what it meant to be grateful. This true account of Anna, a woman who was born into slavery in Maryland, is used by many ministers this time of year, but it was originally told by Fulton Oursler.

Oursler remembered eating with Anna as she sat in his home with her hard, old black hands folded, “Much obliged, dear Lord, for my vittles.”

“But Anna,” he pointed out, “you’d get your vittles whether you thanked the Lord or not.”

“Sure,” she responded, “but it makes everything taste better to be thankful.”

END_OF_DOCUMENT_TOKEN_TO_BE_REPLACED

Being thankful for 2021 | by Linda Brendle

Published in the Rains County Leader on November 24, 2021:

In preparing to write this week, I read last year’s Thanksgiving column called “How Thanksgiving Grows.” The gist of the story was that, because of residual fears about COVID, none of our usual family gatherings occurred, so I planned to fix a small but special meal for David and me. However, by the time the big day came, we had three guests, and I spent the best part of two days fixing the customary multi-course feast. This year we will be sharing a traditional celebration with David’s sisters – and we had to turn down two other invitations.

Although I enjoyed the memories, the article didn’t help much with this week’s column. After that I went to Facebook and scrolled through my photos. I didn’t take many pictures last Thanksgiving, but I did find one of the kitchen island loaded down with food. There was also a photo of the leftovers the next day when we invited the neighbors back for a rerun. I remember feeling grateful that we could enjoy another go-round without all the work and also that all that food wouldn’t go to waste.

From there, I scrolled through the rest of the year. Again, there weren’t a lot of pictures, but there were enough highlights to inspire a gratitude list for this week:

END_OF_DOCUMENT_TOKEN_TO_BE_REPLACED

Published in the Rains County Leader on January 30, 2018:

It’s said that confession is good for the soul, but for a writer, it can also make a good story. Like all stories, though, this one is best told from the beginning.

Back during the holiday season, when the weather was just beginning to get cold, I stood in my closet one morning looking for a jacket. Finding a jacket was not the problem, but finding the right one was proving to be a challenge. I don’t remember exactly what I was wearing that day, but according to my rather limited sense of fashion, whatever it was required a black jacket. The only one I had was too light weight for the forecasted temperatures, so I had to settle for a wool work shirt from David’s Navy days. He outgrew it long before we met, but he kept it around for sentimental reasons. It fits me quite nicely if I roll up the cuffs, and it’s a dark enough navy color to pass for black, so I took it off the hanger while I hosted a mental pity party about my lack of heavy jackets. END_OF_DOCUMENT_TOKEN_TO_BE_REPLACED

On being thankful | by Linda Brendle

Published in the Rains County Leader on November 21, 2017:

It’s that time again. For the next few days, every time you sit down to eat a meal or have some kind of group discussion, someone will suggest that each person should tell what he or she is thankful for. I know. I did it with the group of AWANA students I was listening to last Wednesday. I had two girls and a boy who were all first graders. They tired of studying verses a few minutes before time to move to the next activity, so I asked The Question: What are you thankful for? The first girl exhaled such a long sigh that I finally moved on to the boy. He shrugged and gave me a look that said, I got nuthin’. The other girl brightened suddenly and chirped, “Turkey!” That works when you’re seven, but when you’re older, you might want to be prepared when the subject comes up. END_OF_DOCUMENT_TOKEN_TO_BE_REPLACED

Published in the Rains County Leader on November 22, 2016:

I developed the habit of keeping a gratitude journal years ago when Mom and Dad lived with us. Caring for two people with Alzheimer’s, regardless of how much you love them, is enough to change the most positive person into a grouch. When I realized how negative I had become, I bought a small notebook and resolved to write down at least three things each day for which I was grateful. Finding three things proved to be more difficult on some days than others, but after months of practice and discipline, my attitude began to change. I learned to look for and appreciate the small joys and to overlook the less joyful moments. END_OF_DOCUMENT_TOKEN_TO_BE_REPLACED 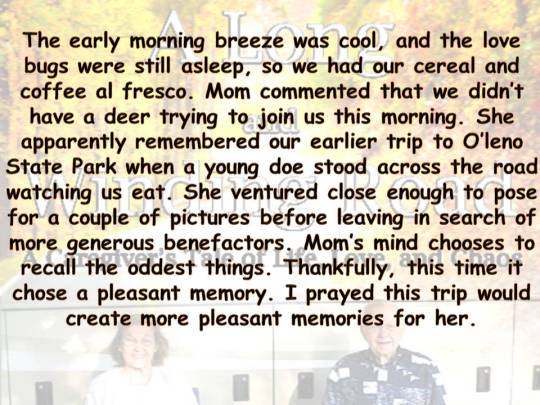 Caregivers are thankful for any small victories and blessings. Now I am thankful for the honor and privilege I had of caring for Mom and Dad for so many years–and for God’s grace when He helped me through the times when I was less than grateful.

Available in ebook format at:

On Sunday, Pastor Jason preached about being thankful–yours probably did, too. The sermon was enlightening and inspiring, but what really stuck with me was a comment he made in his introductory remarks: “I’ve always thought we should devote 364 days a year to being thankful and set aside only one day for grumbling and complaining.”

This time of year, a lot of people talk about cultivating an attitude of gratitude, but sometimes the resolve doesn’t last long. It takes time to develop a daily habit of being thankful. In keeping with that thought, I’d like to share a story about a lady who knew what it meant to be grateful. This true account of Anna, a woman who was born into slavery in Maryland, is used by many ministers this time of year, but it was originally told by Fulton Oursler. END_OF_DOCUMENT_TOKEN_TO_BE_REPLACED

Caregiver Quotes and Tips #4 – Being Grateful | by Linda Brendle

There were days during my time as a caregiver that my attitude was really bad. I had plenty of excuses and even some valid reasons for my feelings, but being negative didn’t improve things a bit. One day during my quiet time I read something about being grateful, and it stuck with me. I wondered how my attitude would improved if I focused more on the positive. END_OF_DOCUMENT_TOKEN_TO_BE_REPLACED

Confessions of an Ingrate | by Linda Brendle

In December, I wrote a post called “Confessions of a Book Junkie” about my lifelong love of books. After reading about my way of keeping track of the books I’ve read and the books I want to read, my cousin commented that perhaps I was a list junkie as well. Earlier this month I wrote a post titled “I’m Addicted,” and my son said it might be more aptly titled “Confessions of a Co-Dependent.” And my brother, after reading some of my comments on Christian’s posts, said he thought I might be a closet liberal. Maybe my next book should be titled “Confessions of…” Saturday I added another confession to the list. END_OF_DOCUMENT_TOKEN_TO_BE_REPLACED

We had our Thanksgiving lunch at the Senior Center today, and I’ve been giving a lot of thought to being thankful. Gratitude has been a popular subject on the Internet lately, from the hoopla over Tim Tebow’s public prayers of thanks for his God-given talents to Facebook challenges to post a status of gratitude each day in November. END_OF_DOCUMENT_TOKEN_TO_BE_REPLACED