Drying My Wings | by Linda Brendle 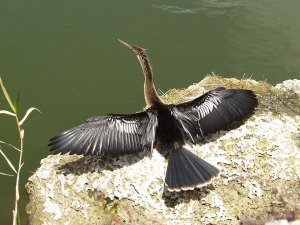 Florida requires that, when developers put in new subdivisions, they leave a certain percentage of the land in its natural state. We were blessed to have a retention pond right behind our house and a screened-in porch – better known as a lanai by the natives – where we could sit and watch the wildlife. Some of the wildlife, like the alligators, was a little too wild, but the large variety of birds was fascinating.

One in particular caught my eye. It was a rather large black bird with a long neck. It would dive under the water and stay for a long time. Then it would surface and stretch its neck straight up so it could swallow whatever tasty bit of marine life it had snagged before disappearing into the water again. When its tummy was full, it would climb out of the water and sit on a log or rock where it would spread its wings and sit for a spell before flying away.

No one in our household of transplanted Texans could shed any light on this bird and its unusual habits, so I went to the Internet. I found a wildlife site that had a place for questions, and I described our visitor. I received a prompt reply that I was watching an Anhinga or Snakebird. The reason it spread its wings after a swim was that, unlike other aquatic birds, it didn’t have any oil on its feathers. It had to spread out in the sunshine so it could dry off enough to fly.

I have felt somewhat like a Snakebird lately, especially Wednesday of last week. It has been so wet this spring that everyone I know is checking their feet for webbing, and companies that make mildew removers are making a fortune. END_OF_DOCUMENT_TOKEN_TO_BE_REPLACED